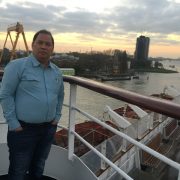 Jerome Ramientas, President of AIM Manila, went to The Netherlands on a business trip last October 2017. Being his first time, the experience to him was profound from day one up to the last day of his stay. Being his first time to Europe, he remarked that the first thing that greeted him after emerging from the airplane was the cold temperature at 9˚C. This was far different from the usual 27˚C to 30˚C prevailing in Manila, Philippines.

Doing business in The Netherlands

After a day of rest, his official visit to AIM’s clients followed. Each visit included the tasks of formally introducing AIM, discussing its objectives, how AIM works and the benefits obtained from its services. Concerns and questions from the clients were addressed and explained. Doing business on the other side of the world is quite different, but a great challenge.

Getting to know The Netherlands

During his trip Jerome visited several cities while meeting AIM’s clients, this gives him the opportunity to know The Netherlands a bit better. His trips took him all the way from Rotterdam visiting the harbor, to Delfzijl, where he had a pleasant tour, to Leer, Germany where crossing a country border without any checkpoints was a new experience.

During this trip also, Jerome finally met the people in person whom he usually communicates only by e-mails and video-chat. Further, staying at The Netherlands gave him an insight of how Dutch people work, think, feel and go on in their daily life.

AIM is for crew recovery

Over-all, his trip to The Netherlands was a success. The response of all clients was positive and encouraging. Jerome was able to show that AIM is working on the human side of the seafarers. That each seafarer who gets sick or experiences an accident while working on a ship deserves personal attention and care. And that by doing so, all thoughts and tendency to bring a claim is being diminished, if not completely prevented. After all, AIM is for crew recovery, not for anything else.